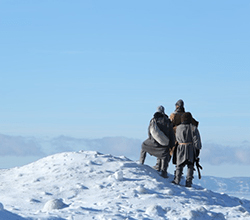 Franklin’s Lost Ships was a Canadian/UK Co-Production that documented the finding of the HMS Erebus, one of two of Franklin’s ships searching for the Northwest Passage on Oct 1, 2014. The ships bell, confirming it was indeed the Erebus was discovered on November 6, 2014. The other ship, the HMS Terror, was still missing at the time.

This special aired on CBC’s Nature of Things with David Suzuki and in the UK on Channel 4. It was shot in Balm Beach, Ontario in Canada and in Hartlepool in the UK aboard the HMS Trincomalee, for the below decks shots.